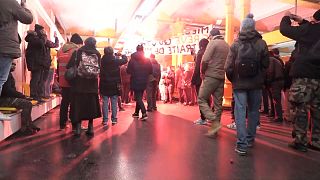 Demonstrators gathered outside the Gare de Lyon, one of the capital’s busiest stations, on Monday morning. On the fringe of this rally, strikers lit up smoke in the corridors of the Gare de Lyon metro station.

Limited train services were announced on Monday with local and suburban lines expected to be the worst hit as nationwide strikes entered a 19th consecutive day. In Paris, half metro lines were announced to be running as normal, while many stations remained closed.

Strikes have been taking place around the country for the past weeks with major traffic disruptions bringing the country to a halt.