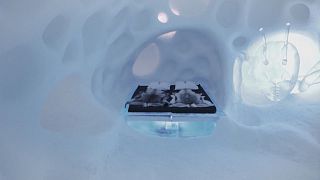 Just outside Jukkasjärvi, the northernmost town in Sweden, with the temperature well below freezing, an artistic marvel is taking shape.

The Kiruna Ice Hotel — a chilly attraction that's been constructed from the snow and ice each winter for three decades — has opened its doors for the season.

Delicate details, such as this chandelier made entirely of ice, are drawn from a nearby frozen river.

In total, there are 15 individually created art suites here, made by a team of sculptors and artists who've traveled from far and wide.

Of 126 applicants, 31 artists and sculptors were selected to work on the ice hotel this year.

They hailed from as far away as the United States, Australia, and Japan.

The ice comes from the Torne, a 522-kilometer river that forms part of the border between Sweden and Finland.

The ice that forms the building material is extracted from the river in large blocks in late March or early April when the river is frozen at its thickest.

The blocks are then stored, in readiness for construction.

And the ice isn't just used as a building material; tables, chairs, champagne flutes, whisky glasses and dessert bowls are made of ice too.

A suite in the hotel will set you back a cool $600 (€538) but the spectacular wild landscape that forms the hotel's backdrop is free to all who make the journey to enjoy it.