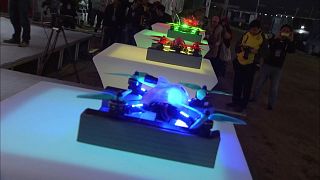 Changhyeon Kang from South Korea was crowned overall champion at the World Drone Racing Championships in Xiangshan, China on Saturday (December 14) after defeating more than 100 competitors from 31 countries during four days of competition.

Participants from around the world gathered here to race their drones though a specially-made, 630 metre track that measures just 4 metres wide and is complete with 16 obstacles.

The pilots navigated their drones at up to 180 kilometres (110 miles) per hour while wearing a first-person-view headset which feeds them real-time video.

Kang, who also won the Junior's title, outpaced Thomas Bitmatta of Australia and France's Killian Rousseau who were placed second and third on Saturday's final race.

Thailand's Wanraya Wannapong won the Women's final over Siyun Park of South Korea and Teng Ma from the United States who rounded out the top three.