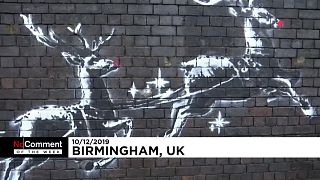 Art takes centre stage in our selection of the best no comment videos this week.

First up in our compilation, above, is performance artist David Datuna eating a €108,000-artwork of a banana duct-taped to a wall. The piece, titled Comedian by Italian artist Maurizio Cattelan, was on display at Art Basel in Miami Beach, Florida.

Continuing the theme, anonymous artist Banksy was back in the news with a piece highlighting the plight of the homeless in the UK.

The work was revealed in a video on Banksy's Instagram account. It shows a bearded man — whom we take to be homeless — sitting on a bench taking a sip of water, before lying down against his bag. The camera then pans out, revealing two reindeer spray-painted onto the wall next to the bench, creating a scene resembling Santa Claus in his sleigh.

Finally, Greenpeace activists scaled the façade of the European Council building in Brussels to unveil a giant banner calling for greater climate action.

It came as leaders of European countries were meeting in the Belgian capital to decide upon how the EU should tackle the climate emergency.