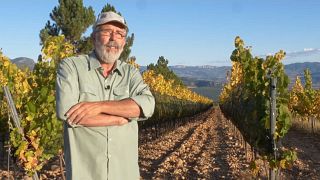 Why are wine producers in Spain moving their vineyards uphill?

Spanish winemakers are having to adapt to the effects of global warming, and many are moving their vineyards further up the mountains. Euronews correspondent Jaime Velazquez has been to one vineyard near Barcelona to find out why.

The wine industry is one of the most important sectors of Spain's agro-economy. Amid a climate emergency, vineyards across Spain are looking for ways to adapt their vines to higher temperatures and droughts.

Mireia Torres is the fifth generation of a family of winemakers, who have been in the business for more than 150 years, in the Catalan region of Penedes, an hour outside Barcelona.

“When my father watched Al Gore's documentary An Inconvenient Truth, he got a shock. And with our own data, [showing] that we had more and more days above 30 degrees in the summer, he realised that we had a problem," she says.

A perfect storm of sunshine, heatwaves and droughts are casting a shadow over the future of more than 4,000 wineries across Spain – in an industry worth €7 billion a year. A recent study concluded that a rise in temperature of between 2.7 and 4.7 degrees will make vine cultivation unfeasible in southern Europe and the Mediterranean by 2070.

In search of milder temperatures, the Torres family has climbed the mountains. The Bodegas Torres winery owns a piece of land 1,000 metres above sea level. When they bought this piece of land, the family never expected they would end up planting vines on it, but the colder nights of the Catalan Pyrenees allow grapes to ripen to the perfect level of sweetness and skin colour.

As temperatures drop by one degree every 100 metres going up, Xavi Ermella, the manager of the Torres' vineyard, believes vines will only have to travel higher as temperatures continue to rise.

“In the plains, in the lower zones, vineyards have now problems like heatwaves. As a result, wines lose freshness and aroma. They are not balanced. It is a problem that can only be solved this way, going to higher zones.”

Back in the valley, Spanish producers are recovering traditional grapes that were abandoned decades ago, hoping to find vines better adapted to the upcoming extreme weather conditions. And these ancestral grapes may be the future of the Spanish vineyards.

Watch Jaime Velazquez report from Catalonia in the player above.