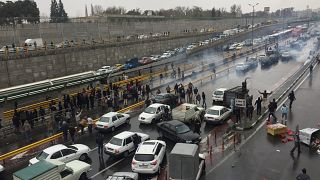 Recent protests kicked off by a rise in fuel prices last week have been a security matter and not carried out by the people, Iran's Supreme Leader Ayatollah Ali Khamenei said on Tuesday in remarks published by his official website.

"Friends and enemies should know we have pushed the enemy back in the military, political and security war arena," he said. "This work of these days has been security work, not from the people."

The remarks come as rights groups are denouncing a rising death toll.

At least 106 protestors have been killed in 21 cities in Iran during the unrest that broke out over fuel prices rises last week, Amnesty International said on Tuesday.

"The organisation believes that the real death toll may be much higher, with some reports suggesting as many as 200 have been killed," Amnesty said in a statement.

The Office of the UN High Commissioner for Human Rights (OHCHR) expressed "deep concern" earlier on Tuesday "following reports indicating that dozens of people have been killed in continuing protests across Iran – some by live ammunition".

“There are increasing reports suggesting the numbers killed are certainly in the dozens, in at least two figures, some reports (are) even higher,” OHCHR spokesperson Rupert Colville said.

More than 1,000 protesters have also been arrested, Colville added, although the agency wasn't able to verify the numbers independently as it does not have an office in the country.

Iran's Revolutionary Guards have warned of "decisive" action if violent protests over a sharp increase in the price of fuel don't subside.

At least one person has already died in civil unrest sparked on Friday after the government announced that the cost of petrol would rise by 50%. Thousands have already been arrested so far.

Activists inside the country claim the death toll is much higher than what's being reported.

The hint at a crackdown comes after days of demonstrators blocking roads and burning petrol stations. The movement has spread to around 100 cities so far.

At least 100 banks and dozens of buildings and cars have been torched, state media reported.

Mahsa Alimardani, the Iran Program officer at British human rights organisation Article 19 and a specialist in Iran's security and internet policy, told Euronews that "typically, I would have hundreds of posts on my Instagram account from Iranian users, and it's kind of gone silent."

"Maybe there's one or two users who come along who have privileged access to internet networks. Ninety to 93% of the global internet connections in Iran are down right now — and you can understand why the government would want to be doing this. Because there's a lot of harrowing images of violence, of, even protestors being killed. And I can see that they don't want these videos to be spread throughout the country, because it can create further hysteria," she added.

Despite the limits on communications, this has been the most sustained protest movement in the country since 2017. Fresh sanctions from the United States have again crippled the Iranian economy, which is also faced with high unemployment, escalating inflation, and corruption.

In a press conference on Monday, US Secretary of State Mike Pompeo condemned violence.

"We condemn strongly any acts of violence committed by this regime against the Iranian people and are deeply concerned by reports of several fatalities," Pompeo said.

"The Islamic Republic must cease violence against its own people and should immediately restore the ability of all Iranians to access a free and open Internet. The world's watching."