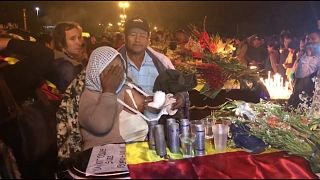 Vigil in Bolivia after supporters of ousted Morales are shot dead

Emotions were raw when relatives of the dead placed Bolivian flags on their coffins, placed on the road where the shooting took place.

They said it happened when protesters tried to cross a security checkpoint.

The murders marked a deadly turn for the crisis in Bolivia, triggered protests across the country over suspicion of electoral fraud in an election on October 20 in which Morales claimed to have won a fourth term.