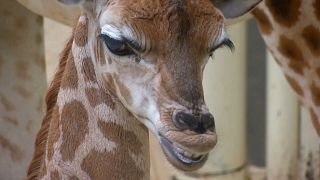 An endangered baby giraffe made his public debut at a northern Czech zoo earlier this week, 12 days after being born in the enclosure.

He was born on Oct. 25 at Liberec Zoo and belongs to the Rothschild's Giraffe sub-species, which is thought to have fewer than 2,000 still living in the wild according to the IUCN Red List of Threatened Species.

Zoo director David Nejedlo said the baby's mother had also been born in the zoo, which has been breeding the animals for more than 30 years.

Forty-six giraffes have been born in the zoo since that time, and the current herd number is four - two adult females, another youngster aged two years, and the new arrival, who is yet to be named.

Numbers of giraffes living in the wild in African countries are decreasing, making breeding programmes in zoos more and more important, according to Nejeldo.