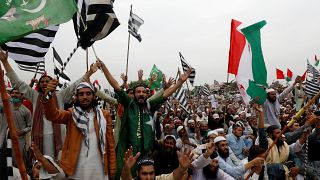 Pakistan opposition sets ultimatum for government to step down

Tens of thousands of members of a radical Islamist party demanded on November 1 that Prime Minister Imran Khan and his administration resign within two days, raising the stakes in a protest campaign that the government has denounced as a threat to democracy.

The campaign is the first concerted opposition challenge that cricket star-turned-politician Khan has faced since he won a general election last year promising to end corruption and create jobs for the poor.

The party enjoys the backing of Pakistan's moderate and secular opposition parties.

Authorities deployed police and paramilitary forces and put shipping containers on key roads in the capital to prevent the massive anti-government march from reaching Islamabad's Red Zone. That's where Khan's sprawling residence, and almost all government offices and foreign embassies are located.

Khan, who came into power following last year's parliamentary elections, has refused to quit despite a rise in inflation and living costs.

The opposition says Khan's government is illegitimate and is being propped up by the military, which has ruled Pakistan for about half of its history and sets security and foreign policy. The military denies meddling in politics and Khan has dismissed the calls to step down.

Rehman, leader of the conservative Jamiat Ulema-i-Islam-Fazl party, is a veteran politician who can mobilise significant support in religious schools across the country. He was joined at the rally by leaders of the country's two main opposition parties.