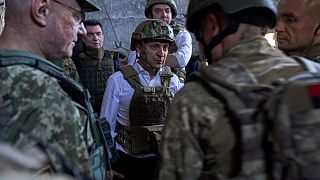 Ukrainian troops and Russian-backed separatists have begun a delicate withdrawal from a key town in the country's east, sparking hopes of a revival of the stagnant peace process in the region.

The Ukrainian army announced that a retreat from the town of Zolote, in the province of Luhansk, had begun on Tuesday night, whilst Russian-backed separatists said they were also complying with the retreat.

The move will leave the town and surrounding areas in a so-called "Grey Zone" or no-man’s land.

The withdrawal was a condition for the participation of Russian President Vladimir Putin in peace talks involving the so-called Normandy Four - Germany, Russia, Ukraine, and France.

Ukraine’s Foreign Minister Vadym Prystaiko said that Kyiv would begin working toward a similar withdrawal from the town of Petrovske.

He added that he hoped preliminary peace talks would take place at some point in November.

Resolving the conflict has been a key policy of the former comedian-turned President Volodymyr Zelenskyi, who won a shock election earlier this year.

Some 13,000 people have been killed in the conflict, which has been running since 2014.

Euronews Correspondent Natalia Liubchenkova says that the deal could be seen as some form of progress, despite widespread scepticism. Watch the analysis in the player above.