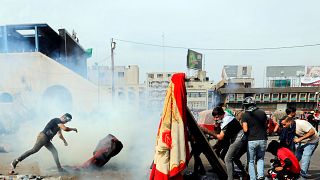 After a few weeks of relative calm, demonstrators clashed with security forces across Iraq over the weekend, leaving more than 70 dead, in one of the worst periods of civil unrest in the country’s modern history.

Security services fired tear gas and live ammunition at those demonstrating in the face of a government clampdown.

Iraq’s Human Rights Commission said on Sunday that more than 2,500 had been injured, whilst medical sources told Reuters that the death toll for the weekend topped 70.

Iraq’s Prime Minister Adil Abdul Mahdi has attempted to placate demonstrators, announcing a swathe of economic and social reforms, and carrying out an investigation into state brutality against some of the protests, but few are convinced he is serious on reform, analysts say he is screaming into the wind.

On Saturday, he announced the deployment of the country’s Elite Counter Terror Forces, still bruised from years of battling against the Islamic State group, to the streets of Baghdad. Yet questions over how long he can remain in office are only getting louder.

But facing an increasingly deadly pushback from security services, what is driving the protests? And is it fair to see Iraq solely through the prism of government on protester violence?

_As Euronews’ Gareth Browne says, in Iraq, "where there is unrest, there is opportunity". Take a look at Gareth's summary in the media player above. _