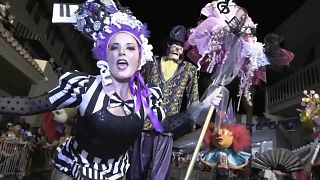 The parade featured more than 40 floats and elaborately costumed marching groups, proceeding through Key West's historic downtown in front of about 60,000 spectators, according to organisers.

Some parade entries illustrated the festival's musical theme, "In Tune But … Off Key," including a huge and colourful "living orchestra" of marching instruments conducted by a large replica of the legendary Wolfgang Amadeus Mozart.

Other standouts included a troupe of Caribbean-style dancers in sparkling feather-adorned costumes, grass-skirted patrons at a travelling tiki bar and a squad of Oompa-Loompas from the book and film "Charlie and the Chocolate Factory."