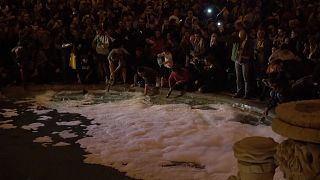 Hundreds of Catalan separatists took to the streets in Barcelona on Tuesday (October 22) and symbolically "cleaned" Barcelona by dumping soap into a fountain.

The wealthy northeastern region was rocked by seven consecutive nights of violent protests after nine Catalan separatist leaders were convicted of sedition on October 14 for leading a failed 2017 bid for independence, which included holding a banned referendum.

The atmosphere has calmed down since Sunday (October 20), but the Committees for the Defence of the Republic (CDR) remain active calling demonstrations like the one on Tuesday.

Spain's main parties have consistently rejected calls for an independence referendum and acting Prime Minister Pedro Sanchez spurned Catalan regional leader Quim Torra during a quick visit to Catalonia on Monday (October 21), accusing him of failing in his duty to restore order and condemn protest violence.

One of the protesters described the jailed separatists as political prisoners and said the demonstrations would continue until all of them were free.