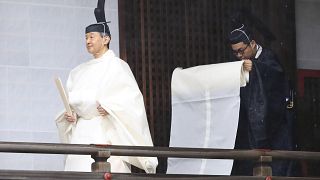 Emperor Naruhito ascended the Chrysanthemum Throne on Tuesday, proclaiming himself Japan's 126th emperor as the audience shouted "banzai" to wish him a long and prosperous reign.

Naruhito pledged at an enthronement ceremony at the Imperial Palace to serve his constitutional duty as a symbol of the state and to stay close to the people, as Prime Minister Shinzo Abe congratulated him and led three "banzai" cheers.

The first Japanese emperor born after World War Two, Naruhito acceded to the throne when his father, Akihito, became the first Japanese monarch to abdicate in two centuries after worrying that advancing age might make it hard to perform official duties.

Naruhito's grandfather, Hirohito, in whose name Japanese troops fought World War Two, was treated as a god but renounced his divine status after Japan's defeat in 1945. Emperors now have no political authority. A court banquet is due to be held on Tuesday evening, before Naruhito and Empress Masako host a tea party for foreign royalty on Wednesday (October 23) afternoon.

The throne, called "Takamikura," is a 6.5-metre (21-foot) -high decorative structure resembling a gazebo at the Forbidden City in China.

It was transported from the former Imperial Palace in Japan's ancient capital of Kyoto, where emperors lived until 150 years ago.

The enthronement ceremony is the high point of several succession rituals that began in May when Naruhito inherited the throne.