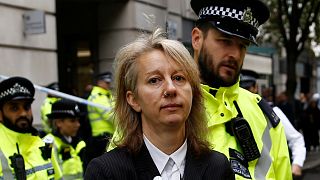 A founder of the Extinction Rebellion pressure group was arrested Tuesday after climbing the building housing Britain's transport ministry in central London.

Gail Bradbrook climbed the building with a sign that read "HS2 is our climate emergency" above the revolving doors. HS2 is a high-speed rail line that will connect London with other UK cities.

Bradbrook, invoking the example women's suffrage activist Emmeline Pankhurst, then tried to smash a window with a hammer and screwdriver. She was later brought down by a police climber.

Another activist tried to lock herself to the transport ministry but was arrested.

Extinction Rebellion, which uses civil disobedience to highlight the risks posed by climate change and the accelerating loss of plant and animal species, is midway through a new two-week wave of actions in cities around the world.

Police ordered a halt to all Extinction Rebellion protests in London on Monday (October 14) after a week of action, saying those who did not comply would be arrested. They have already made almost 1,500 arrests since the protests began.