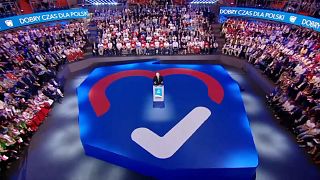 Will smaller parties be the kingmakers after Poland's election?

Elections will take place on Sunday (October 13) in Poland and the super-conservative Law and Justice Party (PiS) is leading the polls by a considerable margin.

In 2015, PiS won the first outright majority since the fall of communism. It may continue to govern the country alone after this weekend, but smaller parties are making gains.

Dr Jarosław Flis, a sociologist at the Jagiellonian University in Krakow, thinks smaller parties will possibly play a part as kingmakers.

Poland has been pushed to the right as the ruling party clamped down on press freedoms and some of the checks and balances on power, which not everyone agrees with.

This year's election campaign saw personal attacks on candidates, as well as issues that have stoked tensions with the main opposition coalition.

Robert Biedroń, leader of opposition party Wiosna (Spring), said: “We want a Poland that is open, modern and tolerant. Equal opportunities in Poland, not party politics but competence and skills are the keys to its success. This is the vision of our Poland - a modern welfare state.”

Another opposition leader with the Civic Coalition is Grzegorz Schetyna. He said the current ruling party needs to go.

Jarosław Kaczyński is the leader of PiS and is widely expected to win Sunday's vote.

“Our goal is to build a Polish version of the welfare state. We must in this term and with God’s help if society supports us - we focus primarily on wage increases.”

A party will need 231 seats to govern with an outright majority in Poland and preliminary results will be known on Sunday at 9 pm CEST.