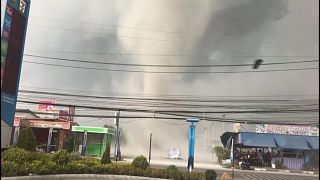 Blustering gustnado in Thailand picks up roofs and signs

Residents captured the startling moments when a gustnado - a swirling wind caused by storm clouds - was seen in Samutprakan province, Thailand on Saturday (October 5).

The gustnado lifted roofs and signs, causing damage to several homes and cars nearby, and was followed by a heavy downpour, according to Thai PBS.

One witness said he first saw the gustnado forming from dust and sand on the ground before it became a swirling wind travelling towards him.

Ruthairat Hongtap, another witness who filmed the event, said she had not seen anything like it before.