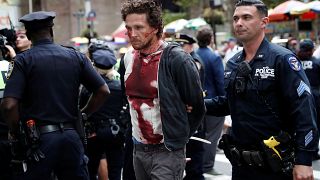 Arrests were made in New York on Monday (October 7) as thousands of climate activists took to the streets to demand immediate action to cut carbon emissions and avert an ecological disaster.

They are the latest in a string of demonstrations against climate change. Last month, millions of young people flooded onto the streets of cities around the world, inspired to take action by 16-year-old Swedish activist Greta Thunberg.

Extinction Rebellion says it expects peaceful protests over the next two weeks in more than 60 cities from New Delhi to New York, to call on governments to reduce greenhouse gas emissions to net-zero by 2025 and halt a loss of biodiversity.

Some protesters in New York covered themselves in fake blood to highlight the possibility of climate-related conflict and death.