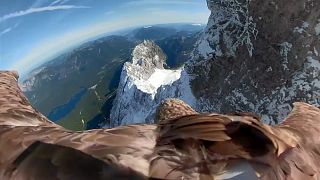 Images from a camera carried by an eagle will capture the stunning beauty of the earth from above — but could also hint of the dire changes to the planet.

Taken from a camera mounted between the majestic wings of a white-tailed eagle named Victor, the pictures will show the world as he sees it, flying over the Alps and the once-magnificent glaciers now crumbling because of global warming.

Victor will embark upon five flights this week over the Alps.

Organisers hope his spectacular eagle's-view footage will help jolt the world out of climate-change apathy and toward swifter action to combat its effects.

His handler hopes that seeing the world as an eagle sees it will also convince viewers of the importance of protecting birds and their environments, especially after a devastating recent report chronicled their decline.