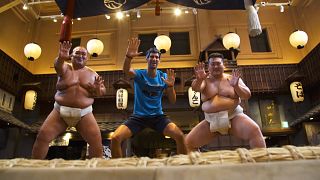 Novak Djokovic tries sumo wrestling ahead of the Japan Open

World number one Novak Djokovic may be in Japan to compete in the ATP's Rakuten Japan Open Tennis Championships for the first time but that hasn't stopped the 16-time Grand Slam champion from interrupting his preparation to take on sumo wrestlers.

After watching from the sidelines, Djokovic then stepped into the dohyo, to learn some moves from the retired wrestlers.

Djokovic will take part in the singles and doubles events at the ATP 500 tournament, facing Australian Alexei Popyrin in the singles while partnering up with countryman Filip Krajinovic in the doubles against Mate Pavic and Bruno Soares.