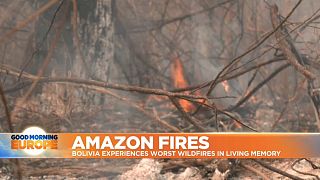 Wildfires are still raging in the Amazon rainforest.

Twelve million hectares have burnt so far, three times more than last year. This means an area nearly the size of Greece.

Brazil paid the hardest price, but the flames are ravaging also some other of the nine countries the Amazon spans to. In Bolivia, 5,000 people are fighting the blaze, but it is still out of control.

It has been dubbed as the worst fires in living memory. Since January, 5 million hectares of forest and savanna were lost in Bolivia, two million just in the past two months. The flames are threatening 1,200 species. As a result, Amazon’s indigenous communities say this is an ‘environmental genocide’.

Euronews’s Monica Pinna reported from the Community of Tierra Hermosa in Bolivia:

The department of Santa Cruz, its Chiquitania dry forest region was the worst affected. Local authorities say around 40 fires are still active and the flames have expanded also new areas. Many locals are still actively involved in putting out fires, like Gregorio Nuñez, a cattle breeder in the community of Guadalupe.

“The first day I came here by myself. I was worried that my pasture could burn, if so, what would my cattle eat? Then we organised some groups and we came by eight, ten, twenty people to put out the fires”.

Experts say one of the causes of the fires is the ancestral practice of ‘chaqueo’, consisting of slash and burn the forest for farming. It is said to have got out of hand this year because of strong winds and high temperatures. Bolivia’s first-ever indigenous president, Evo Morales, has been accused by environmentalists and locals of encouraging the blazes by signing a decree last July that legalised the burning in order to turn forests into pastures. Morales, who is running for a controversial fourth term, has requested the EU intervention after massive protests calling for International support.

A team of 40 French firefighters has worked for the whole month of September in the region and just finalised their mission in the framework of the EU Civil Protection mechanism:

“We can learn from them, they can learn from us, it’s a real exchange. We try to provide one-man or two-men teams of trainers to support volunteers, local firefighters, and the army”, Rodolphe Avenel from the French Civil Protection said.

Watch Euronews's report from Bolivia in the player above.