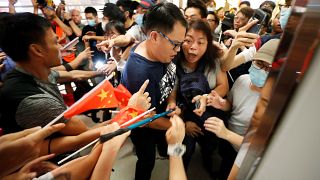 Scuffles broke out in a mall in Hong Kong between pro-China protesters and those denouncing perceived Chinese meddling, at the start of demonstrations across the city on Saturday (September 14).

The pro-China demonstrators chanted "Support the police" and "China, add oil" at the Kowloon Bay mall, adapting a line used by anti-Hong Kong government protesters and loosely meaning: "China, keep your strength up".

"Hong Kong is China," one woman shouted at passersby who shouted obscenities in return in an angry pushing and pulling standoff.

The situation turned chaotic with groups of people trading blows and some using umbrellas to hit their opponents.

The clashes came after several nights of peaceful rallies that featured mass singing at shopping malls by supporters of the months-long protests demanding democratic reforms.