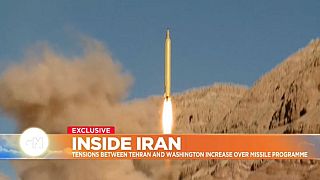 Inside Iran: the fresh missile threat causing alarm in Washington

Iran and the United States remain locked in a bitter standoff over the recently scrapped nuclear deal and the growing military brinkmanship in the Strait of Hormuz.

Whilst much of the recent focus has been on Iran's future nuclear ambitions, it's the country's existing arsenal of ballistic missiles that's causing fresh alarm in Washington.

Iran's stockpile of missiles is seen as a force for deterrence to counter any US threat, and adds instability to American forces in the region.

Euronews’ International Correspondent Anelise Borges has this exclusive report from Iran’s capital Tehran on the high stakes brinkmanship in the Middle East.