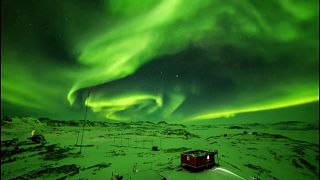 The green polar lights swirled and undulated, throwing light across the ice-covered ground.

The view was recorded by Chinese researchers who are on their 35th Antarctic mission at Zhongshan Research Station. The Chinese expedition team arrived in Antarctica last December to do scientific research.

The aurora is a natural light predominantly seen in the high-latitude regions around the Arctic and Antarctic.