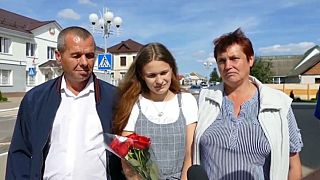 Woman, 24, reunited with parents 20 years since disappearing on train

A woman from Belarus has been reunited with her parents, more than 20 years since losing them on a train when she was a girl.

Yulia Gorina was travelling with her father between the capital Minsk and Asipovichy in 1997 when he fell asleep.

He woke to find that she had disappeared.

Gorina was then found in Russia, where police, unable to trace her family, put her up for adoption.

Her parents were suspected for many years of her murder, repeatedly being questioned by police until as recently as 2017.

Gorina, now 24, ended up living 500 kilometres away in Russia. Her boyfriend, Ilya Kryukov, orchestrated the reunion after finding her parents following an internet search. Her identity was then confirmed by a DNA test.

Lyudmila, Gorina’s mother, told local media: “Twenty years is like a whole life, but we never lost hope, we believed – and so we found each other.”

Yulia said: “My parents have told me that they were searching for me for a long time, that they believed they would find me one day.”

“My mother could not stop hugging me, she made me sit on her lap as if I was a little girl.

“We were chatting until 3 am, and then Ilya and I had to go back to Russia – my daughter was waiting for me,” she added.