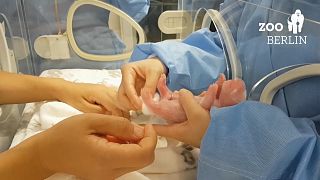 A zoo in Berlin celebrated the arrival of two panda cubs, the first time one of the rare mammals has given birth in Germany.

Video released by the zoo on Monday showed Meng Meng playing with her newborn in an enclosure.

Keepers only confirmed last week the panda was pregnant.

Meng Meng and her nine-year-old partner Jiao Qing arrived from China in June 2017.