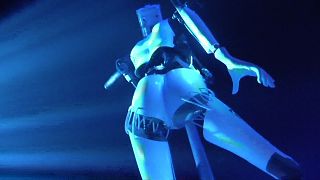 Donning high heels and standing on elevated platforms at a dimly lit club, humanoid robots moved their hips as they pole danced in front of their majority male audience on Friday night (August 30) at Nantes' SC-Club.

The robots will make their official debut at SC-Club on Tuesday (September 3) and will be performing there for a month.

The two robotic dancers are there to mark the club's fifth anniversary and earn a spot in history as the first nightclub to have these dancers grace the stage.

Conceptualised by British artist Giles Walker, the "robot strippers" are made of plastic morsels of female mannequins and metal vehicle parts.

Walker has said the robots aimed to "play with the notion of voyeurism," posing the question of "who has the power between the voyeur and the observed person."

He said they will not replace the club's 10 human dancers, who perform alongside the newcomers, although some might find the robots "very sexy."