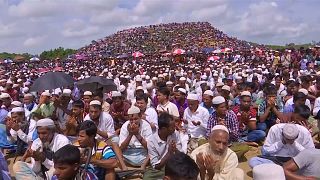 Mostly men and children gathered on hilltops to join in the chants as they shouted: "We want to go home".

There was then a call for prayer, which saw the Muslim men weeping as they recited the Koran.

This Sunday marks two years since over 740,000 Rohingya people fled northwest Rakhine State when the Myanmar military launched operations there.

United Nations' investigators have said the army campaign included mass killings, gang-rapes and was carried out with "genocidal intent."

The military denies almost all the allegations made by refugees during what it said was a legitimate counterterrorism operation.