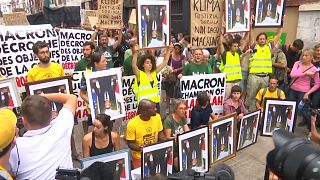 Protesters marched through the streets of Bayonne on Sunday carrying official portraits of French President Emmanuel Macron, which were stolen from town halls around France.

The protest is the finale of months of civil disobedience which saw protesters steal the portraits with the aim of carrying them upside-down at the G7 summit.

They said the move was a mark of defiance at Macron's politics and the image he is trying to present to world leaders at the summit in neighbouring Biarritz.

Several hundred protesters marched carrying paper packages of portraits, some the stolen ones of Macron, others bore slogans such as: "Where is Macron when it comes to climate change and social justice".

One of the organisers will face trial in September for stealing a portrait and could face five years in prison and a €75,000 fine, Cecile Marchand told Reuters TV. Two more face trials in Lyon and Orleans.

The movement, which was formed under the slogan "Take Down Macron" (Dechirons Macron), has seen 125 portraits stolen to match the 125 days it took France to overtake its carbon footprint this year, the activists said.

The stolen portraits were handed on and hidden before making their appearance on the streets at the summit as Macron met with leaders for a summit that will likely expose deep rifts over a clutch of issues such as global trade, climate change and taxing big tech.