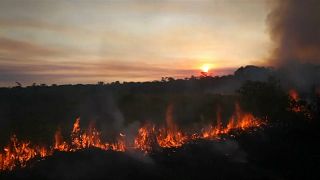 Fires in the Amazon forest are burning so intensely that the smoke has covered cities thousands of kilometres away. These fires are reported to be so large that they can be seen from space. Experts say it could have major climate impacts.

"Regarding the fires in the Amazon, I am under the impression that it could have been set by the NGOs because they had asked for money. What was their intention? To bring about problems for Brazil."

Bolsonaro has been repeatedly slammed for not protecting the world’s biggest forest and instead promoting a pro-business, deforestation policy.

Camila Veiga is the head of the Brazilian Association of Non-Governmental Organisations and she was at one of the protests on Wednesday.

"Bolsonaro's is very irresponsible. He has to prove what he is saying that the organisations (NGOs) are setting fires in the Amazon," she said.

Watch Good Morning Europe's report on the Amazon forest fires in the player above.