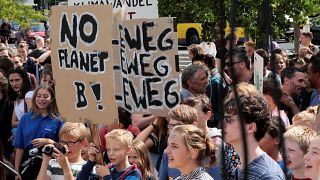 Hundreds of students in Berlin skipped school to attend the latest "Fridays for Future" protest, despite having only been back at school for nearly two weeks.

Youth activism has been under the spotlight since Greta Thunberg, 16, shot to prominence last year for starting the weekly protests on the cobblestones in front of Stockholm's Parliament House, holding a "school strike for climate" sign.

Thousands of students around the world have since copied her protest for climate action, and youth organisations have launched strikes involving students in more than 40 countries.

In Germany, the protests have particularly taken off, with a "Fridays for Future" summer congress in Dortmund and a thousand-strong protest in Hamburg taking place earlier this year