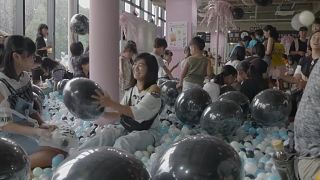 What is claimed to be the world's first theme park dedicated to tapioca balls has opened in Tokyo.

It is the latest attempt to cash in on Japan's tapioca craze.

Tapioca balls are made from starch extracted from the cassava root.

Japan's first "tapioca boom" took place in the early 1990s and featured coconut milk, while the second boom occurred just over ten years ago when big black tapioca pearls took over the market.

This latest trend features the same black tapioca pearls but combines them with colourful drink combinations to take the visual appeal of tapioca to a new level.