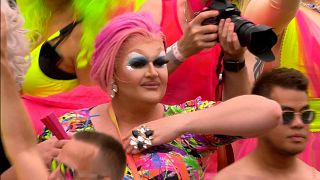 Tens of thousands of spectators lined Amsterdam's canal on Saturday to watch a parade of decorated boats during the Dutch capital's LGBT (lesbian, gay, bisexual, and transgender) pride festival.

The parade was part of the nine-day festival Pride Amsterdam, and organisers said 80 boats officially took part in the canal parade.

There were boats that represented Dutch police, the military, and an undertakers' organization.

This year, many pride events are marking 50 years since the infamous police raid on a New York City gay bar, the Stonewall Inn.

The event sparked riots and jump-started the modern gay rights movement. New York's first pride parade was held the year after Stonewall on the anniversary of the riots.

The theme of this year's pride festival in Amsterdam was: "Remember the past, create the future."

“This year we are commemorating the Stonewall riots, which broke out in New York 50 years ago and form a decisive moment in the history of the LGBT-movement”, said Amsterdam Gay Pride director Lucien Spee.