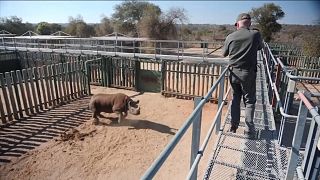 Africa's black rhino is one of the world's most critically endangered species, with up to 5,400 of the animals estimated still living.

In South Africa, vets and rangers in one national park are going to incredible lengths to keep one injured female alive.

"Goose" was found nearly dead last year, after poachers shattered one of her hoofs with bullets while hunting her for her horn.

The horn of a critically endangered black rhino can fetch millions of dollars on the global black market.

When "Goose" was discovered, she was emaciated and severely malnourished and had several bones protruding through her skin.

Her injured hoof had been further damaged by walking on it.

Now, the staff at Kruger are fitting a custom-made cast to the hoof every few weeks to help it heal.

The hope is she may one day breed.