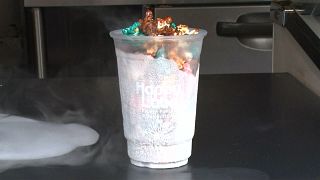 Popcorn cooled by liquid nitrogen, an innovative street food, has gained popularity in Osaka, Japan as high temperatures continue to scorch many areas in hot summer.

A creative cold drink store in Osaka recently launched a new product, called "frozen popcorn". The shop assistant makes creamy popcorn with sweet corn from Tokachi area of Hokkaido Prefecture as raw material, mixes the popcorn with liquid nitrogen at around 200 degrees Celsius below zero in a pot and pours them into a cup.

A large amount of heat is carried away during the vaporization of liquid nitrogen, which makes the popcorn cool and crisp.

According to the store manager, the small store has gone viral on social media and attracted many customers to come every day to take photos.