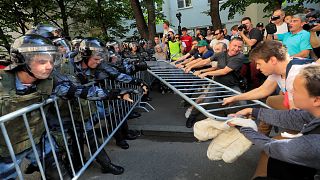 Hundreds of people were arrested as protesters gathered in Moscow on Saturday to demand free and fair elections.

They gathered outside to demonstrate against the disqualification of candidates from the upcoming city council election.

Russian authorities had earlier warned citizens to stay away from the unauthorised rally.

They said Moscow local election candidates were prohibited from running because they had failed to collect a sufficient number of genuine signatures in their support, an allegation the opposition rejects as false.