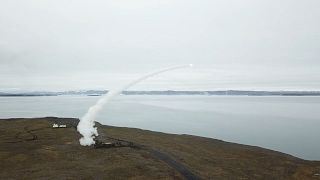 Russian Navy carries out missile drills in Sea of Japan

Russia's Pacific and Northern Fleet carried out missile drills in the Sea of Japan and on the Novaya Zemlya archipelago, as shown by footage released by Russia's Ministry of Defense on Thursday.

According to the Russian MOD, the projectiles were simultaneously launched by a destroyer and a missile boat, hitting the target around 60km away.