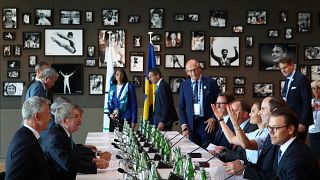 Stockholm and Milan battle it out to host 2026 Winter Olympics

The International Olympic Committee will today being voting on the the host of the 2026 Winter Olympic Games.

Yet the process has been as much about the finances as it has the sport.

Milan and Stockholm are the two remaining bidders in the race now that four others have pulled out due to worries over scale and costs. Italy last hosted a Winter Games in 2006, and have hosted two in total. Yet Sweden, despite the popularity of winter sports in the country - has only hosted one Summer Games in 1912. Public support for the games is at 80 percent in Italy, but only 50 percent in Sweden.

Swedish Prime Minister Stefan Lofven made a last minute effort to back Stockholm saying his country is ready and would deliver on its promises. He met with the president of the International Olympic Committee on Sunday.

Bilateral meeting between the IOC President Thomas Bach and the Candidate City delegation from Milan-Cortina 2026 #CandidateCity#WinterOlympics@milanocortina26#OlympicMuseumpic.twitter.com/ICF8tK8X2x

"Sweden is ready to host the Winter Olympic Games in 2026 and the Swedish government is very supportive," he told delegates.

Giovanni Malago, President of Italy's National Olympic Committee said "Milan represents not only for me but for the rest of Europe the best city in Europe and perhaps in the world."

On Monday a winner will be selected through a vote. They will have the task of following the Beijing Winter Games of 2022 - the Chinese hope to make 300 million more people familiar with winter sports.