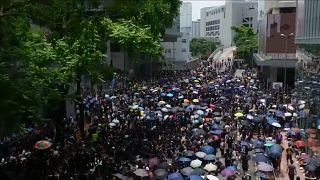 Thousands of protesters back on the streets of Hong Kong

Thousands of protesters gathered outside the Police Headquarters in Hong Kong on Friday, aiming to keep up the pressure on the government over the controversial extradition bill.

It is the third time demonstrators took to the streets over the proposed bill, which has now been suspended by the territory’s Chief Executive Carrie Lam.

Laurel Chor told our Good Morning Europe programme that the protesters' demands include the extradition bill to be scrapped completely by Hong Kong’s legislative council, a full investigation into police violence against demonstrators which includes the alleged excessive use of force, as well as the release of people who have been arrested during the protests so far. Chor also said that the 1 July is a date normally marked by pro-democracy marches in the Chinese-controlled territory every year and if these issues are not resolved by then “the 1 of July will be a really big day”.

Watch our Good Morning Europe report from Hong Kong in the player above .