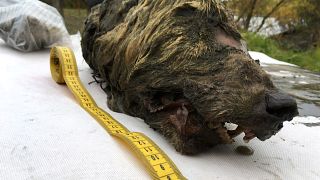 With its dry fur and wet tongue, this wolf looks like it may have only died recently.

But in fact, it's the remains of an animal which experts believe roamed the earth 40,000 years ago.

It was discovered in the Abyisky district of northern Yakutia in Russia by a local man in August 2018.

Thanks to Siberia's frozen permafrost its brain, fur, tissues and even its tongue have been perfectly preserved.

Valery Plotnikov, Chief Researcher of the Mammoth Fauna Study Department at the Academy of Sciences of Yakutia, thinks that the wolf could represent a different subspecies of the mammal which inhabited Yakutsk region 40,000 years ago.

"Modern wolves do not have this kind of yellow colour. Maybe it is the result of soil oxidation where it was found," he explains.

"The discovery is unique of course, because in the past we have found skulls of wolves without tissues and fur, but this one has kept its ears and even a tongue. The brain is also perfectly preserved as we have seen it during the tomography. That's why this is a unique discovery."

Scientists believe the unearthing of the Ice Age wolf head could lead to further discoveries.