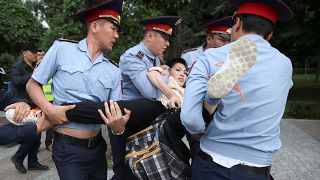 Police in Kazakhstan have arrested scores of protesters upset over the election of the country's first new president in 30 years.

Kassym-Jomart Tokayev secured a five-year term on Sunday but critics say the vote was rigged and the 66-year-old faced little meaningful competition.

Tokayev was the handpicked successor of Nursultan Nazarbayev, who ruled the central Asian country with an iron fist since independence in 1991.

He was installed as acting president after Nazarbayev resigned in March. Tokayev then called snap elections, sparking hope of a new democratic beginning.

There were arrests on election day and then a further 250 detentions in Almaty, Kazakhstan's principal city, on Wednesday.