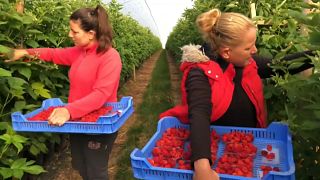 UK suffers from shortage of seasonal fruit pickers this summer

In Herefordshire, in the West of England, the berry harvest has begun. But this year soft fruit farmers are finding there are far fewer eastern European seasonal workers coming back to fill jobs, putting the berries at risk of rotting unpicked on the fields.

Three years ago there were four workers for every job. But according to the largest provider of labour to farms like this one, the figures have reversed. Now one person has four jobs to choose from - in large part because growers across Europe are now competing for labour on a greater scale

“Workers in eastern Europe are incredibly attracted by other countries. Main competitors are Germany and the Netherlands” says Stephanie Maurel, who works for a top agency providing seasonal jobs to farms in England. She adds: “these countries are doing a really good job in governmental support for workers, tax breaks, their growers have invested heavily and their farms have developed really quickly so they are in need of more labour.”

In 2017, Britain had a 10% drop in the number of European seasonal workers coming from Europe, in 2018 the drop was higher at 13% and the same figure is expected this year. The UK is around 10,000 to 15,000 workers short and fields go unpicked with fruits that won’t end up in the shops.

The situation this summer has meant UK fruit farmers are fighting on many fronts. Improving working conditions for workers compared to its EU competitors is a priority.

A reason why this is happening now is that a weaker British economy means these seasonal migrants stand to make less money when they go over to the UK. Claudiu Netoiu works as a foreman in a farm in Kent: “We did have some no shows, so it’s quite challenging because today we have a gang of 50 people and sometimes we have only 40 turning up.” He adds: “one of the big reasons is the value of the British Pound as before the Brexit referendum the Sterling was strong, now it’s dropped to something awful.”