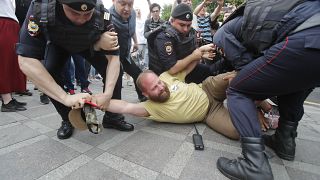 Navalny among hundreds arrested at protest over Golunov's 'framing'

Russian police said they had detained more than 200 people on Wednesday (June 12), including opposition politician Alexei Navalny, at a protest in Moscow calling for punishment of police officers involved in the alleged framing of a journalist.

Police abruptly dropped drug charges a day earlier against investigative journalist Ivan Golunov, a rare U-turn by the authorities in the face of anger from his supporters who said he was targeted over his reporting.

Golunov, 36, known for exposing corruption among Moscow city officials, was detained by police last Thursday and accused of dealing drugs, an allegation he flatly denied.

Reuters witnesses said well over 1,000 people marched through central Moscow, chanting "Russia will be free," "Russia without Putin" and "Down with the Tsar" as police warned them not to break the law and blocked access to certain streets.

The authorities had warned protesters that their demonstration would be illegal and could pose a risk to public safety.

Under Russian law, the time and place of protests involving more than one person need to be agreed with the authorities in advance.

According to the Russian media, the number of detained was at least twice as much as official numbers - over 400 people.