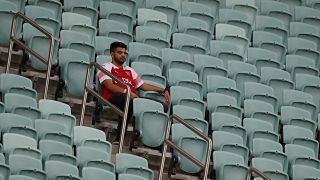 Yet Liverpool and Tottenham Hotspur fans travelled to Madrid to see their teams play, while Arsenal and Chelsea fans went all the way to Baku in Azerbaijan for last week's Europa League clash.

Rosie Rogers from Greenpeace UK told Euronews the impact on the environment was significant:

"The equivalent of the C02 created by all those flights was the same as the entire life cycle of 1,500 family cars. That's a huge amount.

"Huge congratulations to Liverpool of course, but I think it's an own goal for UEFA who could have organised both these games in the UK."

According to the International Civil Aviation Organisation, a group of 12,000 supporters from London to Azerbaijan’s capital has an carbon footprint of approximately 5,595 tonnes of CO2.

Baku and Madrid were awarded those finals in 2017, but Ms Rogers continued that the other games during the tournaments were arranged to take account of who was winning - and that greater flexibility may be needed in future for the finals:

"They need to take climate priorities and weave them into these plans."

Watch the interview in the player above