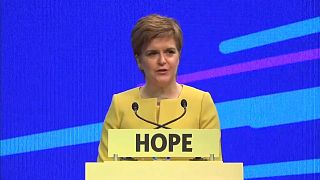 Scotland is one-step closer to a second independence referendum as the government in Holyrood approved new legislation yesterday which could enable another vote on the issue to be held.

Nicola Sturgeon said a fresh ballot before 2021 could give Scotland, “the opportunity to choose to be an independent European nation – rather than have a Brexit future imposed upon us”. The First Minister had said previously: “If all Westminster has to offer is more chaos and confusion – potentially under the premiership of an extreme Tory Brexiteer – then more and more people will come to the conclusion that Scotland’s future is best served as an independent country”.

Philip Paterson, a political analyst at Oxford Analytica, told Good Morning Europe that the government in London “cannot keep refusing to endorse a second independence referendum as it would be democratically unattainable.” He added the Scottish government: "will legislate now in the hope that ultimately London will be pushed into a position to endorse that vote.” Paterson went on to say that the: "support the Scottish National Party is very much consolidated after the results of the latest EU elections, (the SNP) was very, very strong.”

The Scottish National Party secured a record three MEPs in the highest European Parliament vote in its history at 38% in the EU elections earlier this week. The government in Westminster has repeatedly rebutted the idea of allowing Scotland to hold a second vote on its independence. In 2014 Scottish voters had the opportunity to go to the polls and choose between remaining as part of the United Kingdom or becoming an independent country. At the time, 55% of the voters chose for Scotland not to leave the United Kingdom, with 45% of the votes going to the ‘yes’ (leave) campaign.

Earlier this month, tens of thousands of people marched on the streets of Glasgow, Scotland’s biggest city, demanding a second referendum on the issue.

Brexit is believed to be one of the main reasons behind the push for a fresh vote in Scotland. In the 2016 EU referendum, the Scots voted overwhelmingly to stay in the EU with 62% of the people in favour of remaining in the European Union against 38% voting to leave.

Watch Good Morning Europe's interview about Scotland's new legislation for an independence referendum in the player above.