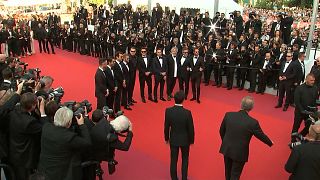 Hollywood heartthrob Leonardo DiCaprio made his third appearance in as many days on the Cannes Film Festival red carpet on Thursday (May 23), this time accompanied by actor Orlando Bloom.

The duo walked the red carpet for the premiere of Formula E documentary "And We Go Green", which DiCaprio co-produced.

The movie, co-directed by Fisher Stevens and Malcolm Venville, follows a season of the all-electric street racing championship.