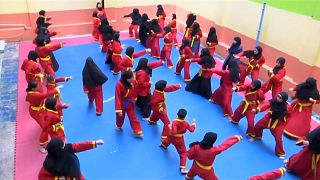 In the heart of Egypt's capital, a martial arts sport once used to fight colonialism in a small Indonesian village is now helping dozens of women stand up to daily harassment.

The women, mostly teenagers and young adults, gather in Cairo's Indonesian Cultural Center weekly and train to enhance their self-defence skills and fitness.

With the help of Indonesian students studying in Egypt, over 1,200 women and children are learning the sport in Cairo, which they hope will help them fight ongoing street harassment.

Experts surveyed by the Thomson Reuters Foundation last year ranked Cairo as the world's most dangerous megacity for women, based on a lack of protection from sexual violence and harmful cultural practices, as well as poor access to healthcare and finance.

The sport dates back to the sixth century, where it was practised in the areas of Sumatra and the Malay peninsula.

Two kingdoms, the Sriwijaya in Sumatra and the Majapahit in Java, used the fighting skills and between the 7th and 16th century ruled much of what is now Indonesia, Malaysia and Singapore.

Pencak is the performance aspect of the discipline, while Silat is the fighting and self-defence version of the sport.

There are many different techniques in Silat but players usually focus on strikes, joint manipulation and throws. In three two-minute round bouts, players earn a point for punches, two points for kicks and three points for takedowns.

Pencak Silat has more than 150 variations of style across the nation and utilizes hand and feet movements. However, its popularity has diminished among Indonesia's younger population.