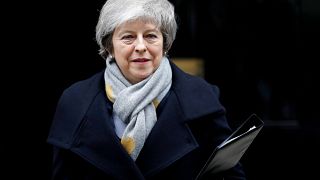 British Prime Minister Theresa May is once more fighting for her political survival, after the resignation of one of her most senior cabinet ministers in protest against her Brexit strategy.

The leader of the House of Commons Andrea Leadsom quit over May’s suggestion that MPs should have a vote on whether to hold a second Brexit referendum.

May made the referendum proposal to get parliament behind her deal on Britain’s withdrawal from the European Union. But now her chances of passing that deal look slimmer than ever before and many analysts believe she could be replaced as the leader of the Conservative Party by a more hardline Brexiteer.

Euronews Brussels correspondent Bryan Carter told Good Morning Europe that while European leaders remained committed to the Withdrawal Agreement negotiated with Theresa May, they were also keen to avoid a no-deal Brexit.

“There’s a big worry here in Brussels that there will be perhaps a hardline Brexiteer, perhaps somebody like Boris Johnson, a notorious Eurosceptic, who’s not afraid of a hard Brexit, and so clearly this will harden positions on both sides and that will risk the UK crashing out of the EU which is an outcome that Brussels clearly doesn’t want,” he said.

Watch Bryan’s report in the video player above