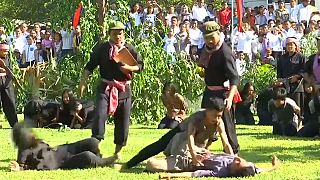 Cambodian performers on Monday (May 20) re-enacted scenes of civilians being killed by Khmer Rouge soldiers to remember the millions who died during the murderous Maoist regime that came to an end 40 years ago.

Hundreds gathered at the notorious Choeung Ek 'Killing Field' to mark the annual Day of Remembrance with prayers and performances in the hopes that the younger generation would learn from this dark piece of history.

Between 1.7 million and 2.2 million people were said to have died during the regime led by Pol Pot from 1975-1979. Most of them died of starvation, torture, exhaustion or disease in labour camps or were bludgeoned to death during mass executions.