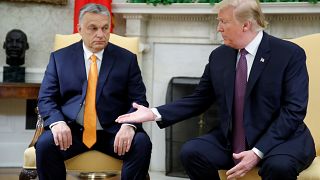 Even so, it's taken him over two years into Trump's term in office to secure an invitation to the White House.

When it finally happened yesterday, the meeting between Trump and Orban was a friendly one. Both right-wing leaders expressed their mutual admiration, with Trump praising Orban's hardline stance on immigration in particular.

"People have a lot of respect for this prime minister," Trump said as the two men sat side-by-side in the White House.

Orban, for his part, was equally as complimentary.

"I have some expectations for this meeting this afternoon," he said. "First of all, to strengthen our strategic alliance, then to discuss global political issues because so many changes are going on and we have some similar approaches. And I would like to express that we are proud to stand together with the United States on fighting against illegal migration, on terrorism and to protect and help the Christian communities all around the world. So president thank you very much for the invitation."

Christian values were praised by both men, who have both advocated for border walls in their countries to keep out migrants.

"You have been great with respect to Christian communities. You have really put a block up and we appreciate that very much," said Trump.

"From the perspective of Viktor Orban, this meeting has been a tremendous success," said András Rácz, a non-resident fellow of the Estonian Foreign Policy Institute.

"One needs to see that the last time a Hungarian Prime Minister was received in the White House was in 2005.

"So even though experts expected more concrete announcements from the meetings, this meeting with President Trump is something that may become very, very useful for Viktor Orban in the campaign of the upcoming European Parliament elections.

"Hungarian pro-government media is already presenting the meeting as a breakthrough, as an unprecedented success, and as respect for the politics of Viktor Orban coming from the US President. This is something very very handy for Orban just two weeks ahead of the EP elections.

"One needs to see that such a meeting, this present meeting with its length of approximately 45 minutes was mostly a protocol event. For a real meeting, you need usually two hours or even more.

"And though both leaders emphasised the common points they agree upon, there are still a number of questions on which there are disagreements.

"One needs to point out Russia's influence in Hungary, Hungary's need to diversify its gas supplies, the major Russian nuclear power plant in Hungary and most recently, Russia's controversial international investment bank just relocating its headquarters from Moscow to Budapest.

"So there are a lot of controversial issues that were not mentioned in the public part of the meeting, but they are indeed on the US-Hungary bilateral agenda."

Watch the full interview with András Rácz in the video above.